Ikea recently came out with a range of air purifiers and also an air quality sensor. The Vindriktning does not have a display but shows the air quality data in the form of a traffic light with red, yellow and green LEDs. One of the most striking features is actually the price as it costs only around EUR 10 depending where you live.

It looks very nice and the build quality is quite good but this article will look beyond the looks and see how good it is at actually measuring the air quality.

The Ikea Vindriktning uses the Cubic PM1006K particle sensor that only costs a few dollars. This sensor does not use a laser but a less accurate LED as a light source.

The PM1006K does not have a built-in fan but Ikea added one and mounted it on top of the sensor. This is probably a good idea as it creates a constant air flow through the sensor enclosure and thus a more accurate measurement.

Interestingly Ikea advertises the Vindriktning as a PM2.5 sensor but the official specs do only mention a range of particles between 0.3μm~10μm thus measuring also much larger particles than PM2.5. This is important because it would mean that it mixes larger particles into the results whereas fine particles below 2.5μm are regarded as much more harmful.

The manual describes the cut-off values for the traffic light as following:

Which is very unclear because it does not mention the metric of PM2.5 used. Typically, PM2.5 is either measured in μg/m³ or US AQI. After some research and experimentation, it turns out that it actually measures the air quality in μg/m³.

And this is a problem!

The world health organisation recently updated its air quality guideline and does not recommend that the annual exposure to PM2.5 exceeds 5 μg/m³. However, the Vindriktning shows you a green light until 35 μg/m³ which is SEVEN TIMES the WHO air quality guideline. It is also around 3 times what the US AQI regards as Good.

When the Vindriktning starts to turn yellow (and describes this in its manual as “OK” air quality), we are already in the “Unhealthy” territory as per US AQI.

It turns red at > 85 μg/m³ and describes it in the manual as “Not Good”. At this point we are 17 TIMES above the WHO annual recommendations for PM2.5. 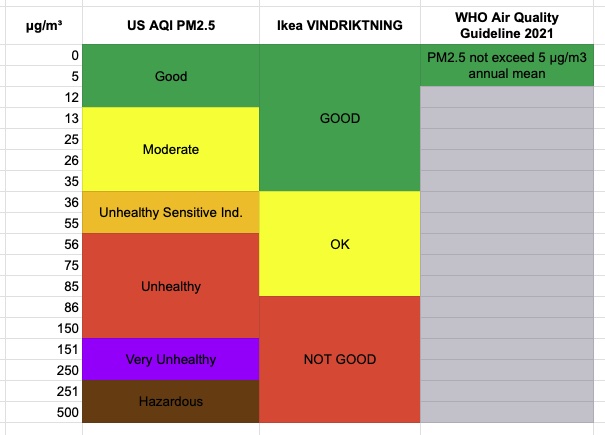 In my opinion this is a BIG ISSUE. A green light should indicate healthy air but the Ikea Vindriktning often shows green when in fact the air could already be multiple times outside safe limits defined by the WHO or US AQI. This problem is even more severe because the sensor does not have a numeric display that could show the measured value. Thus a good PM2.5 of 3 μg/m³ has the same green light as a moderate/unhealthy 32 μg/m³ with the customer seeing no difference between the two. This can lead to a false sense of safety and give the impression that the air is good when in fact it is several times outside international standards.

I also think that labelling the yellow light is highly misleading. As per the Vindriktning manual, the sensor shows a yellow light at 84 μg/m³ and Ikea labels that air quality as “OK”. New Delhi, being one of the worst polluted capital cities in the world, had an average air quality of 84.1 μg/m³ in 2020. Exactly this air quality would still show as yellow or “OK” on the Vindriktning! Greenpeace India estimated that during 2020, 57.000 premature deaths could be attributed to air pollution in Delhi alone. For me, labelling this air pollution as “OK” is not Ok!

To be fair, the Ikea Vindriktning manual does not make any claim that it measures annual exposures with its color bands and could very well be used as a smoke indicator within the kitchen where you normally have a more short term exposure. However, it could also be used by people permanently and leading them to switch off their air purifier at 35 μg/m³ (when the Vindriktning would show GREEN) with the false believe that the air quality is good when in fact it would still be seven times above WHO recommendations.

I hope in one of the next updates, Ikea will review it’s cutoff bands for the traffic light and bring it more in line with international standards and update their manual.

How accurate is the Ikea Vindriktning?

It is easily possible to add a Wemos D1 mini to the Vindriktning and thus enable it to send data to a cloud backend. So I was able to get a constant stream of data from it and was able to compare it to our AirGradient standard sensor which is the Plantower PMS5003 sensor.

The Plantower PMS5003 is one of the best low cost PM2.5 sensors using the laser-scattering method and has been proven to have a good correlation and accuracy compared to reference instruments.

Below is a chart with the Ikea Vindriktning (red) versus two Plantower PMS5003 sensors (green and blue): 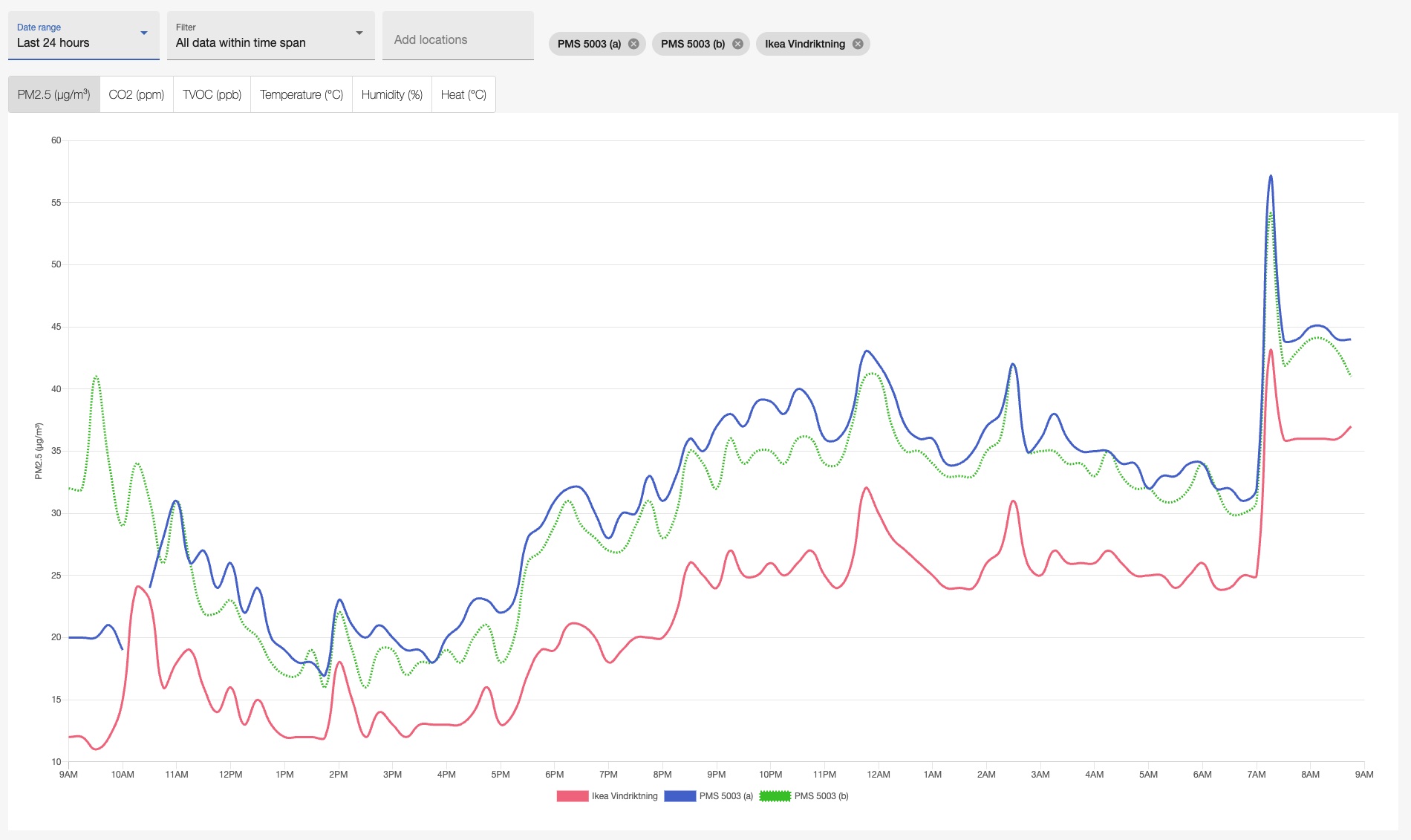 It can be seen that all three sensors correlate very well but that the Vindriktning only shows about 65% of the PM2.5 values of the other two sensors and thus seems to considerably understates the air pollution.

The second test was indoors in an environment where I can reach zero PM2.5 through a professional positive pressure filtration system. Interestingly here we can see the opposite, that the Vindriktning is not able to reach zero readings and is consistently higher than the PMS 5003. 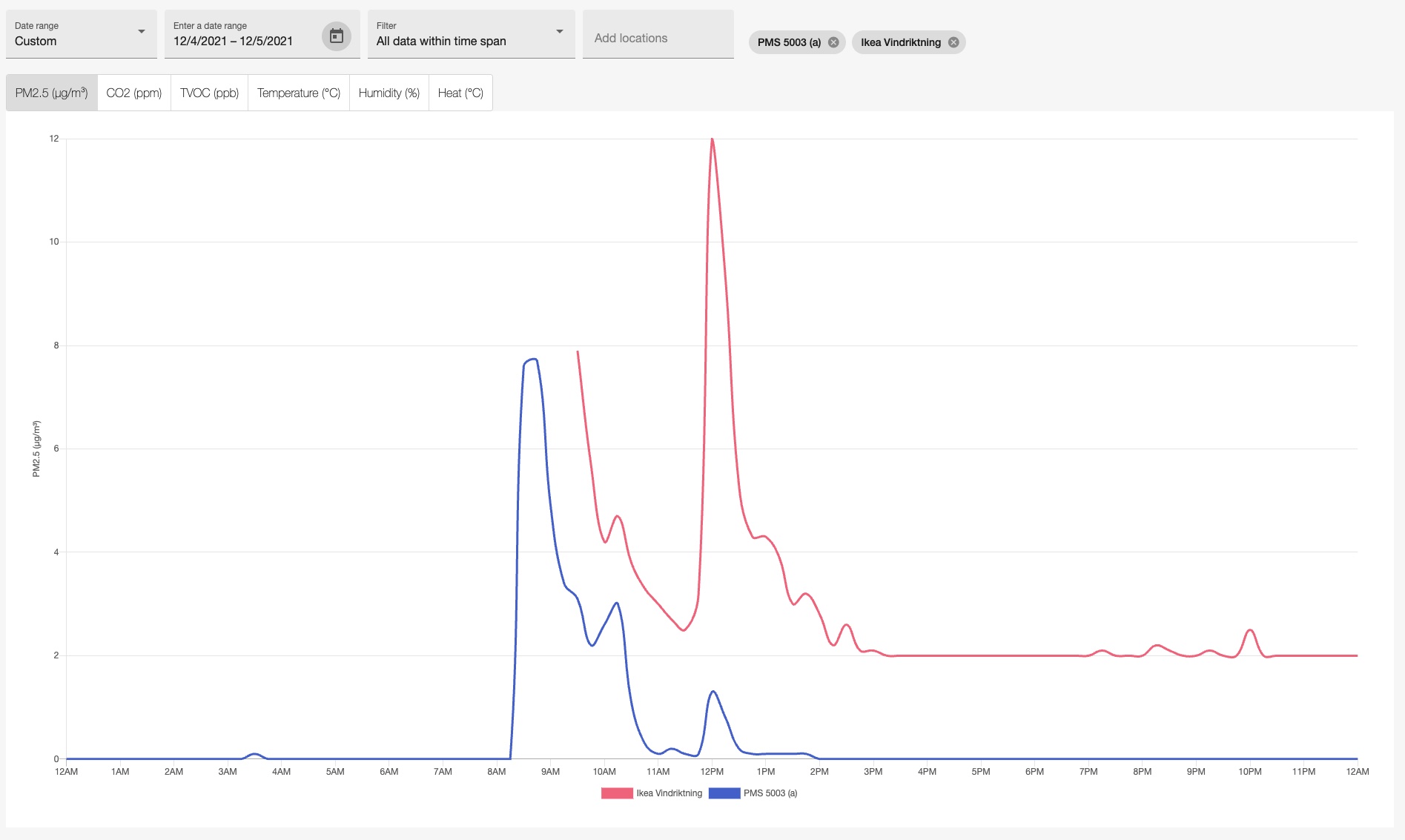 As per official spec sheet of the PM1006K, the sensor has an accuracy ±20μg/m³ or ±20% of reading and thus -even with the deviations to the Plantower- is still within its specified accuracy.

I really want to like the Vindriktning! It has a great built quality and price and is very simple to use. The addition of a small fan to improve the air flow through the sensor is a good upgrade and shows that Ikea wants to provide accurate measurements -even with a cheap sensor.

However, the defined cut off values for the air quality and its description as “Good”, “OK”, and “Not Good” are not based on science or international recommendations and create the false understanding that the air is good, when in fact it is not good at all.

I do hope that in one of the next upgrades of the Vindriktning, Ikea will bring its traffic light indicators more in line with WHO recommendations on healthy air quality.