We Measured the CO2 Level in a Classroom. This is What We Found Out.

In the city of Chiang Mai in Northern Thailand, many adults and children alike suffer from the air pollution caused by the annual smoke season. From February to April, farmers slash and burn their fields in order to plant crops for the next growing season. In addition, natural forest fires are likely to occur as the dry season makes it easy for wilted leaves to catch fire. As a result, the Air Quality Index (AQI) can reach up to levels of 500, causing increasing discomfort as immense concentrations of CO2 fills the air. During this period, it is a common occurrence for schools to perform emergency evacuations when the air quality reaches hazardous quantities. Because of this problem, parents, students, and teachers must be aware of how prolonged CO2 exposure could affect their children’s health in the long term.

AirGradient is monitoring the air quality in an international school in Chiang Mai. The levels of CO2 and PM2.5 in the school’s 30 classrooms are constantly monitored and examined using its sensor network. PM2.5 are fine particles originating from smoke that are smaller than 2.5 micrometers and can pose significant health risks. The network indicates that the levels of PM2.5 in most of the school’s learning spaces have been reduced to a healthy level due to their considerable use of HEPA-based air purifiers. However, the school realized that some of the classrooms have elevated CO2 levels that could significantly impact the student’s cognitive performance and test scores.

In order to understand the implications of the CO2 measurements of the AirGradient network at that school, we need to first understand the effects of CO2 on cognitive performance.

CO2 levels under 1000 ppm are considered healthy levels, with outdoor levels often as low as 400 ppm while indoor CO2 levels range between 420 to 1000. However, if levels rise above 1000 ppm, people could experience mild symptoms such as drowsiness, restlessness, increased heart rate and difficulty breathing. This is especially problematic in schools where students require increased concentration and attention to learn new information.

If levels of CO2 rise above 2000 ppm, it will cause substantial discomfort, hinders students from performing optimally in class and impede the development of their cognitive performance in the long term. Symptoms include nausea, poor concentration and feeling stifled in addition to the ones previously mentioned.

Although indoor CO2 levels are typically below 1000 ppm, having over 20 students and teachers in an enclosed classroom would naturally raise the CO2 levels and it is not uncommon that CO2 levels can go beyond 3000 ppm.

There has been extensive evidence proving that prolonged exposure to concentrated levels of CO2 is detrimental to children’s ability to perform optimally in schools. According to a study from Harvard, increasing indoor CO2 levels by 400 ppm would result in a decrease in cognitive functioning by 21%. Classrooms that are not properly ventilated could have CO2 levels reaching beyond 3000 ppm, compared to the healthy level of 1000 ppm. With CO2 levels that high, students could experience up to an 80% decrease in cognitive functions. This makes it almost impossible to make schools an optimal learning environment for the students without continuous ventilation of the classrooms.

The following chart is derived from a study that exemplifies how the performance of different decision-making tasks are affected by three levels of CO2 (600, 1000, and 2500 ppm). 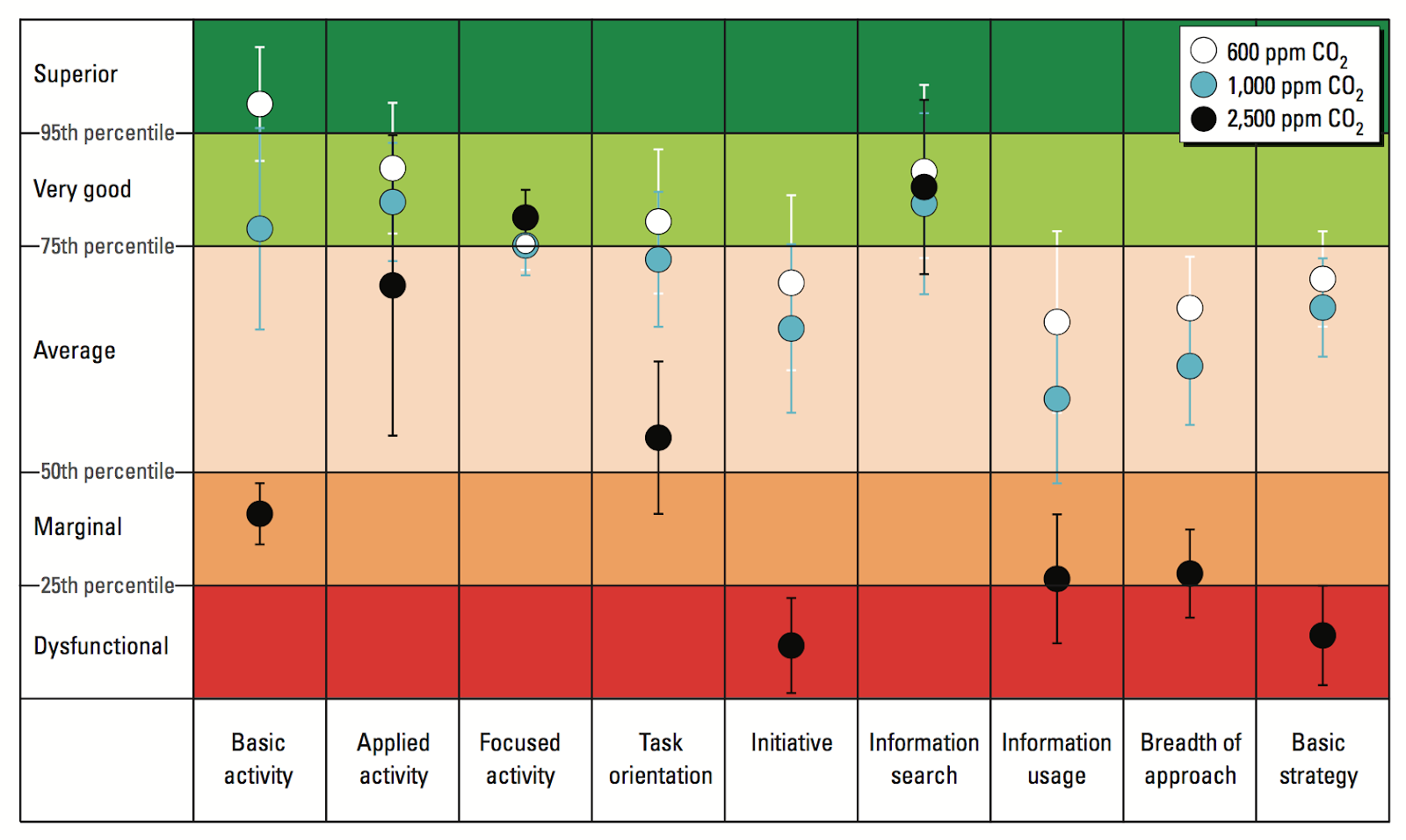 The chart indicates that activities performed in 600 and 1000 ppm of CO2 range from good performance to average (as they reside in the green to light orange regions). However, those performed at 2500 ppm performed significantly worse (most results residing in the orange and red regions). For example, we can extrapolate the data from the “Information Usage” section (one of the performance tasks determining the student’s ability to effectively utilize given information) into a linear scale. From this we can visualize how increasing levels of CO2 decreases the student’s performance in “Information Usage”: 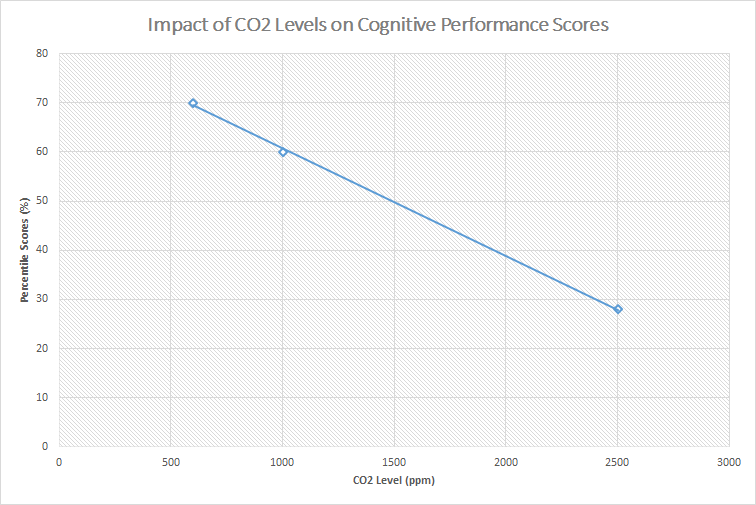 We used the AirGradient sensor network to monitor the CO2 and PM2.5 levels of all the classrooms in our pilot international school in Chiang Mai.

While most classrooms had acceptable levels of CO2, one particular classroom showed very high CO2 levels.

The graph below from this classroom shows the development of CO2 throughout the school day:

Before going into the reasons for the high CO2 values, lets first analyze the data:

The average during the school day in this particular classroom is approximately 2080 ppm CO2. From the information we gathered from the studies above, we can expect the student’s cognitive performance to become severely limited on a daily basis. If we assume a linear development and look for instance on “Information Utilization” from the study above, the average individual would function at approximately 28% of our full cognitive performance based on the average CO2 measured during that school day. 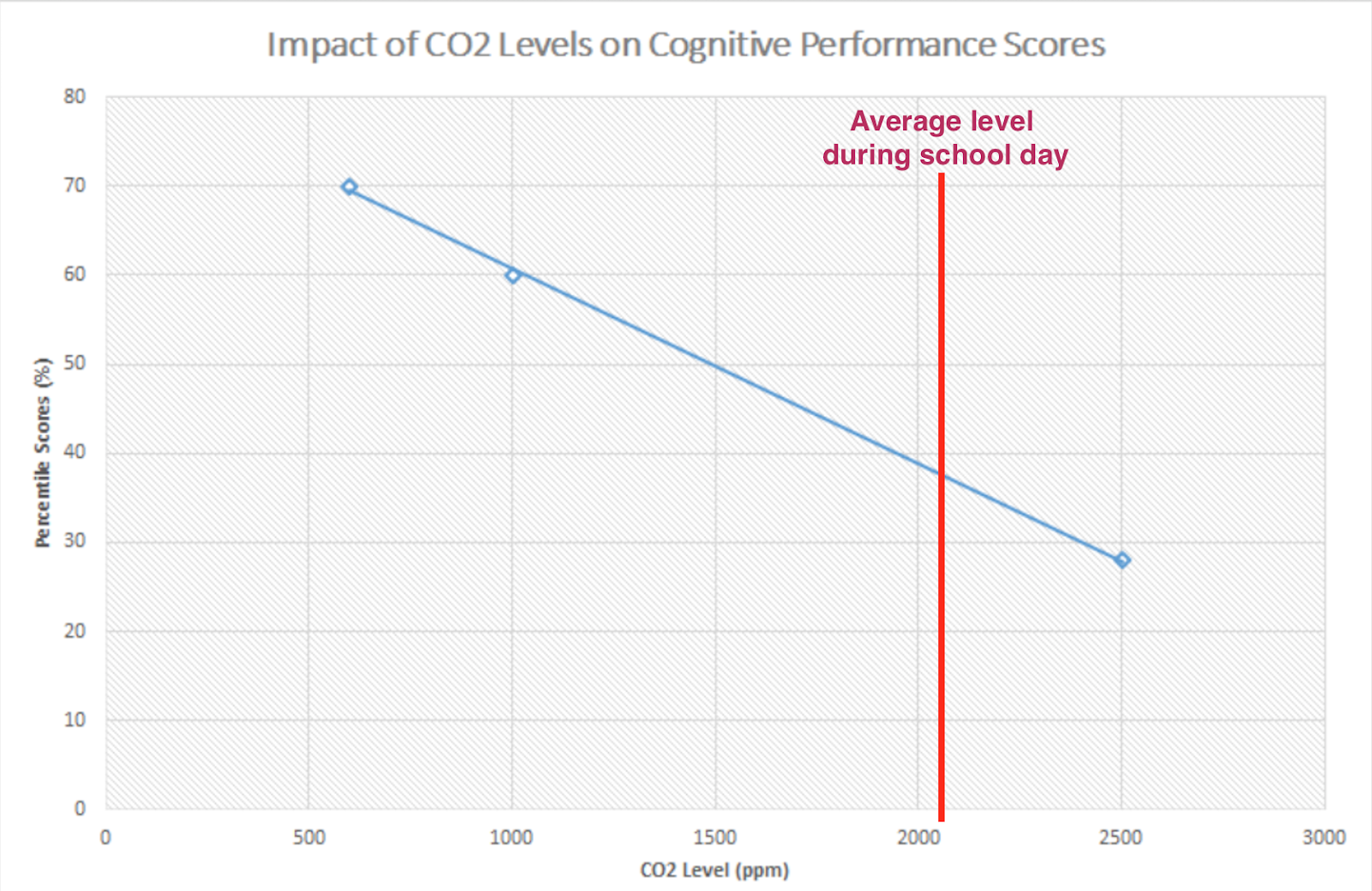 So in order to find out why this particular classroom has such high levels of CO2, we have to look at two things, the classroom design and the occupancy:

From these findings, we can implement some solutions to mitigate the classroom’s high CO2 levels.

By using CO2 monitors such as AirGradient, we could easily determine CO2 levels with real-time data and immediately see if CO2 levels improve based on the mitigation steps we take. For this particular classroom, the following solutions could be considered.

The simplest action you could take is to open your doors and windows during classroom breaks. By dispersing your classroom’s CO2 around 30 minutes before class started, could reduce CO2 levels to the baseline outdoor levels of approximately 450 ppm. This would be optimal if done three times a day, the first before school starts, during the mid-day break, and after school ends.

Unfortunately, opening doors and windows would only be effective if the outdoor air is not polluted. If you often experience outdoor air pollution than this is out of your control, doing so would only cause polluted air to flow into your classrooms. In order to mediate this without opening your windows, we could use HEPA-based air purifiers to remove PM2.5.

Similar to the ventilation method, the air purifiers could be run during breaks or when the class is not having their teaching period. It is important to calculate the rate at which the purifier functions (also known as Clean Air Delivery Rate – CADR) in addition to the dimensions of the classroom. By doing this, you could determine whether the purifier you intend to purchase is capable of purifying the class within a certain timeframe.

For example, if an air purifier has a CADR of 360 m3 per hour, it is capable of purifying the air quality of a larger space than purifiers with less CADR. If you calculate your room’s height, width, and length (e.g. 8m×5m×3m=120m3) and divide the resulting volume of the room by the purifier’s CADR (120m3 divide by 360m3/h), we could calculate the time taken for the purifier to completely purify the room (0.33 hours, or 20 minutes). By performing these simple calculations, we can determine that the purifier is able to purify the classroom within a 20-minute timeframe, which is the average time of many school breaks.

Schools often allocate classes to different grades or children of certain ages to random classrooms without any consideration. It is important for them to be aware that humans with larger body mass are directly proportional to the amount of CO2 released. Therefore, older students release higher levels of CO2 and if they are packed into a small classroom, they would naturally experience stuffiness and other symptoms resulting from concentrated CO2.

Hence, we would recommend that higher grades (older students) be assigned to larger classrooms to disperse the amount of CO2 produced. Similarly, it would be alright to assign younger children to smaller rooms as they do not produce as much CO2. This simple act of relocating involves no cost with a small amount of awareness.

Although humans produce significant amounts of CO2, keep in mind that mold is also a contributing factor as it absorbs oxygen and releases CO2. Mould can appear in structures if they have cracks in walls where humidity and moisture can seep in. You could prevent the growth of mould by implementing weatherstripping to seal your cracks to prevent moisture from entering. Furthermore, regularly cleaning, disinfecting and drying surfaces is essential to clearing mould as well as maintaining general cleanliness within rooms.

If you would like to make the decision to make a significant investment towards improving your air quality, the best option that we could recommend is to install ventilation systems. Installing these systems would call for major renovations and consultations with ventilation experts to assess if your building is suitable for these changes. There are two main ventilation systems that are commonly implemented: positive and balanced air pressure systems.

In summary, positive air pressure systems filters and forces fresh air into buildings, which results in old and stale air being pushed out through cracks and openings in the room. Balanced air pressure systems have the added advantage that they could potentially save energy costs by using a heat exchange unit. Both systems would require the building to be sealed using weatherstripping instead of relying on gaps in the walls where air could escape. To learn more about these ventilation systems, you could read more from our article on improving your indoor air quality.

It is important to be aware of the carbon footprint of your mitigation measures. Although powerful heating, ventilation, and air cooling systems can effectively purify and filter air, it uses a considerable amount of energy that comes from fossil sources. In turn, this may release a lot more CO2 to the environment. However, it is an element to keep in mind while balancing your need to maintain the quality of your air.

A common belief that has been widely circulated is that to reduce CO2 levels in rooms, all you need to do is to grow plants as they absorb CO2 while producing oxygen. Although this process is true on a global scale, it would require approximately 7-8 trees (not plants) to offset the amount of CO2 produced by a single person. Hence, it would be unrealistic to solely rely on plants to reduce CO2 levels inside an already crowded room.

Although the main focus of air pollution is often directed towards harmful toxins and pollutants, we shouldn’t disregard the dangers of being exposed to high concentrations of CO2. Maintaining the best learning environment for students and teachers alike is of utmost importance to schools and this is just one of the simplest ways in which we can care for their wellbeing. 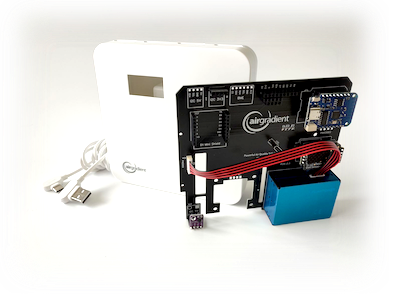